A Celebration and Town Steeped in History

Getting together with old friends and making new ones is what the St. Louis Day Celebration in Castroville is all about. And this year, when the festival celebrates its 140th birthday on Sunday, August 21st, folks from far and wide are expected to gather once again in one of the state’s largest one-day displays of fellowship and merrymaking.

140 years ago, a gathering of only a handful of St. Louis parish families and their friends met in Biediger's river bottom near Castroville, to celebrate the feast day of their patron saint, St. Louis IX of France, and the now famous and century-and-a-quarter-old St. Louis Day Celebration was born. That first picnic cost the parishioners just $25, and the entire tab was footed by the St. Louis Men's Society of the parish. Needless to say, both the cost of putting on the festival and its attendance has swollen tremendously since its humble birth.

The "granddaddy" of church festivals celebrates its birthday this year, and the site will again be pecan-tree shaded Koenig Park on the banks of the Medina River. An ideal spot for a picnic, there's lots of room to relax and enjoy the day.

If these century old pecan trees could talk they would surely tell some fascinating tales of many St. Louis Days’ gone by.  Whereas those first few picnics gathered together only a small handful of people, recent attendance has grown as high as 10,000, several times the town's size! Visitors from far and wide find their way to Koenig Park each year. Last year's guest book showed visitors attending from everywhere in Texas, as well as from numerous foreign countries and U.S. states. No wonder the giant picnic has been dubbed "Homecoming for the State of Texas" by the Texas Tourist Agency.

As in the past, guests are expected to arrive in Castroville early to do a bit of worthwhile sightseeing in the 178 year-old town that was founded by Henri de Castro in Sept. 1844, when he brought in settlers from Alsace-Lorraine. The town, as a whole, is listed with the National Register of Historic Landmarks in Washington, D.C. It is the only Alsatian colony of its kind in the U.S., according to reliable sources in Alsace, and pioneer Alsatian homes and structures can still be found in large numbers throughout the town. The "Little Alsace of Texas" is quite unique in that the culture and dialect of the original Alsatian colonists, even in present times, remains very much visible. The rock-walled bungalows that comfortably suited the early 19th century family are still thought a slight more livable than contemporary abodes. Most of the pioneer homes have been restored and are marked with Pioneer Castroville House (PCH) markers. Many of the older folks still speak the true Alsatian dialect (mixture of German and French, with a sprinkling of English thrown in) fluently. Castroville is just 15 minutes west of San Antonio on U.S. 90. 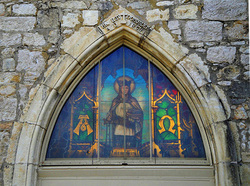 The most notable structure in town is the majestic 152 year-old St. Louis Catholic Church, with its spire reaching 110 feet into the sky.  The historic structure, built of native limestone and cypress, acclaimed a Texas Historic Landmark in 1970.  A taped narration of the church and parish can be heard in the vestibule of the church.

The day will begin in a dignified manner with Holy Mass at 9:30 am on picnic day the famed Liederkranz Men's Choir, for the 38th consecutive year, will sing the picnic day Mass again this year.

Another tourist attraction, the Landmark Inn-formerly the Vance Hotel, built about 1849, was donated to the Texas Parks and Wildlife Dept. by the late Miss Ruth Lawler in 1974. The newly refurbished Landmark Inn Historic site offers comfortable and low-cost room accommodations to picnic goers. The old structure and lovely grounds are reminiscent of years past and are characteristic of Castroville's pioneer homes. Write to Park Manager, Landmark Inn Historical Site, 402 Florence, Castroville, TX 78009, or phone 830-931-2133 or 512-389-8900 for reservations or more information.

Other sightseer attractions are the Moye Foundation Center, on whose grounds rest the century-old original convent of the Sisters of Divine Providence in the US; the first St. Louis Church which was built in 1844, just 8 days after Castroville was settled, and just recently restored, the first parish school that was erected in 1868; and many old structures. Visitors also journey to Cross Hill. It seems to stand as a sentinel watching over the green and beautiful Medina Valley below as it shadows the historic cemetery. Many historians are lured to this cemetery to look at its numerous grave markers dating back beyond the mid-1800’s. Inscriptions on tombstones are in five languages:  English, Spanish, German, French and Latin.
© 2016 St. Louis Catholic Church | 610 Madrid St. | Castroville, TX 78009 | PHONE: 830.931.2826 | EMAIL: rectory@stlouischurchcastroville.org